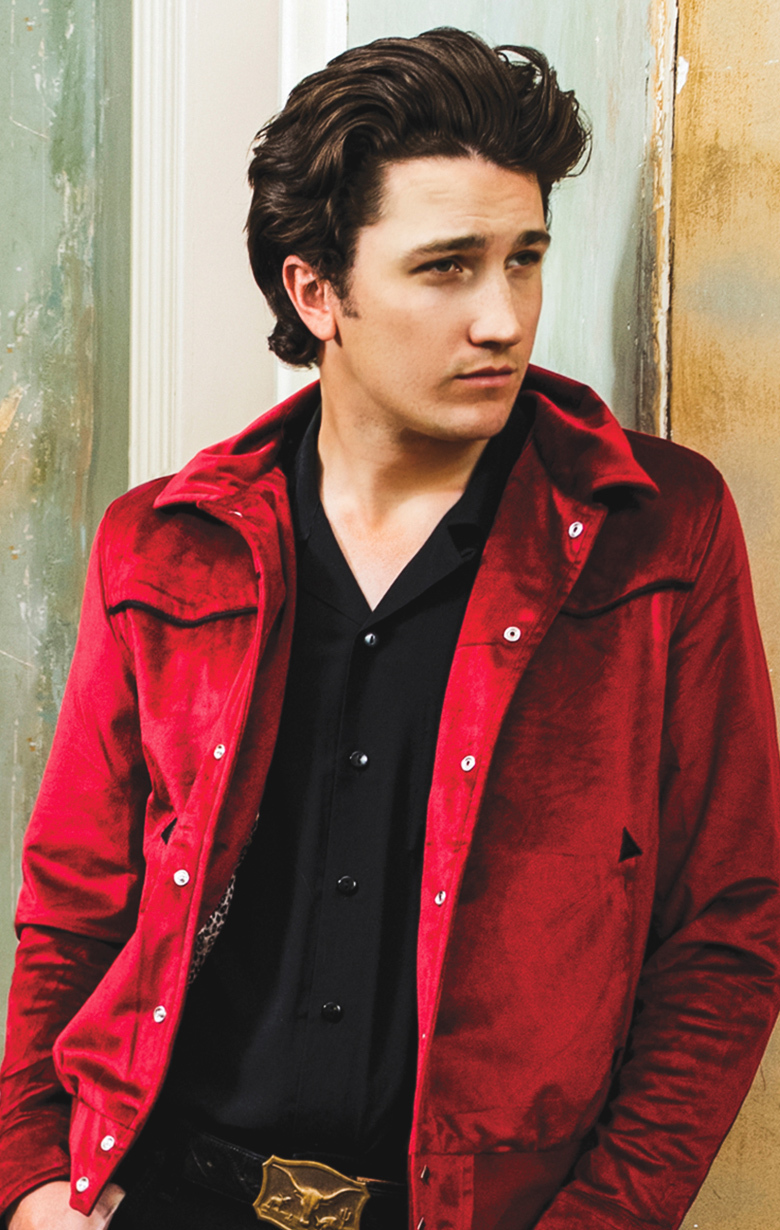 When country music newcomer Drake Milligan moved from Fort Worth to Nashville, he didn’t just come here to sing. He came to listen. At just 19 years old, armed with an appreciation for the history of country music, Milligan listened in co-writes and recording sessions, where songwriters taught him how to tell a story, legendary producers taught him how to use the mics and studio as a vehicle for his voice, seasoned musicians were willing to back the new guy, and his country music heroes shared insightful advice on how to seamlessly shift from the studio and the stage — letting things snowball from there. Now at 23 years old, having taken in all that wisdom, he’s ready to introduce himself to the world with the release of his debut EP, Drake Milligan. It was Milligan’s intent to pen every song on his first release, but he knew that he’d be better off if he didn’t go at it alone. “Word got around, and I was invited into more and more co-writes, and finding my own sound was what that was all about.” “I wrote for the last three years. I write every day. You realize when you get to Nashville that you have to write thousands of songs before a really good one comes out,” he says. That’s where his heroes came in. Milligan was able to book writing sessions with industry legends like Bill Anderson (Brad Paisley, Conway Twitty, George Strait), Dean Dillon (Chris Stapleton, George Strait, Kenny Chesney), Monty Criswell (Josh Turner, Trace Adkins, Tanya Tucker), Marv Green (Billy Currington, Brooks & Dunn, Lonestar), Paul Overstreet (Blake Shelton, Randy Travis, Ronnie Milsap), Terry McBride (Easton Corbin, Garth Brooks, Hank Williams Jr.) and Brice Long (Jon Pardi, Gary Allan, Randy Houser). “The reason I came to Nashville is because all of my heroes are here. All the guys who wrote and played on my favorite songs are still so good. They wake up every day and want to write the best song they can. I wanted to learn something from every write. Writing with those songwriters was a rite of passage for me,” Milligan says. “Seeing how excited Bill and Dean and the others are about writing songs was so inspiring to me.” “We all get here with a different set of influences. Mine were mainly George Strait and Elvis. Along with a lot of Alan Jackson, Randy Travis, and George Jones. That’s what my mom and dad listened to, so my earliest music memories came from that,” he says. “As I was writing, I learned that the best sad songs are bittersweet and even a little hopeful. I love that tradition in country music: how sad songs can help you feel understood. That’s the magic, because not everything in life is sunshine and rainbows.” Once the songs were written, it was time to find a producer. Milligan enlisted the award-winning music producer and industry icon Tony Brown (Brooks & Dunn, George Strait, Vince Gill) and songwriter/producer Brandon Hood. Brown first discovered Milligan’s talent as a performer when he saw him portray Elvis Presley in the 2017 CMT TV series Sun Records, an adaptation of the Tony-winning musical Million Dollar Quartet. It was then time to record, and Milligan opted for seasoned session musicians who played on the music he was raised on. “When I hear Stuart Duncan (George Strait, Alan Jackson, George Jones, Tim McGraw, Clint Black, John Prine, Travis Tritt, Dolly Parton, Reba McEntire, Elvis Costello, Barbara Streisand) playing fiddle on my record, it takes me back to all the songs I loved that he played on,” he says. The EP also boasts renowned piano player Gordon Mote (Alan Jackson, Carrie Underwood, Josh Turner, Brad Paisley, Blake Shelton). “I figured a guy like that wouldn’t even want to play on a new guy’s record,” he admits, even though he’s more of an old soul at heart than a so-called new guy. Finally, when it came time to unearth his very own sound, the Nashville newcomer turned to his roots: Texas. Growing up in Fort Worth and loving the outdoors as much as he loved music, Milligan’s intent was always to sound like Milligan, as opposed to merely copying the sonic vocals and instrumentations of his heroes. While the family scrapyard business was never his plan B, he still thinks of Texas as home and Nashville as his home base. “There’s no way I could’ve made this record in Texas. The songwriters and players here are the best in the world. I don’t want to ever lose my roots,” Milligan says, “but Nashville is like no other place in the world.” The result is his debut EP, stacked with five songs all co-written by Milligan, packed with everything country music fans want. Milligan layers the fiddle and steel in the trouble-drowning, alcohol-soaked “Over Drinkin’ Under Thinkin’” and rediscovers the lost art of fast talking in the upbeat, rebellious “Sounds Like Something I’d Do.” But it’s not all up tempo toe-tappers. It’s in the ballads that he really showcases his deep, smooth as silk vocals. “Don’t Look Down” has Milligan painting a picture of falling in love on a dance floor, defying gravity thanks to the honky-tonk’s trusty old jukebox, and “She” is a beautifully simple but emotive depiction of a lovesick boy completely in love with a girl, as he lists off everything he loves about her.