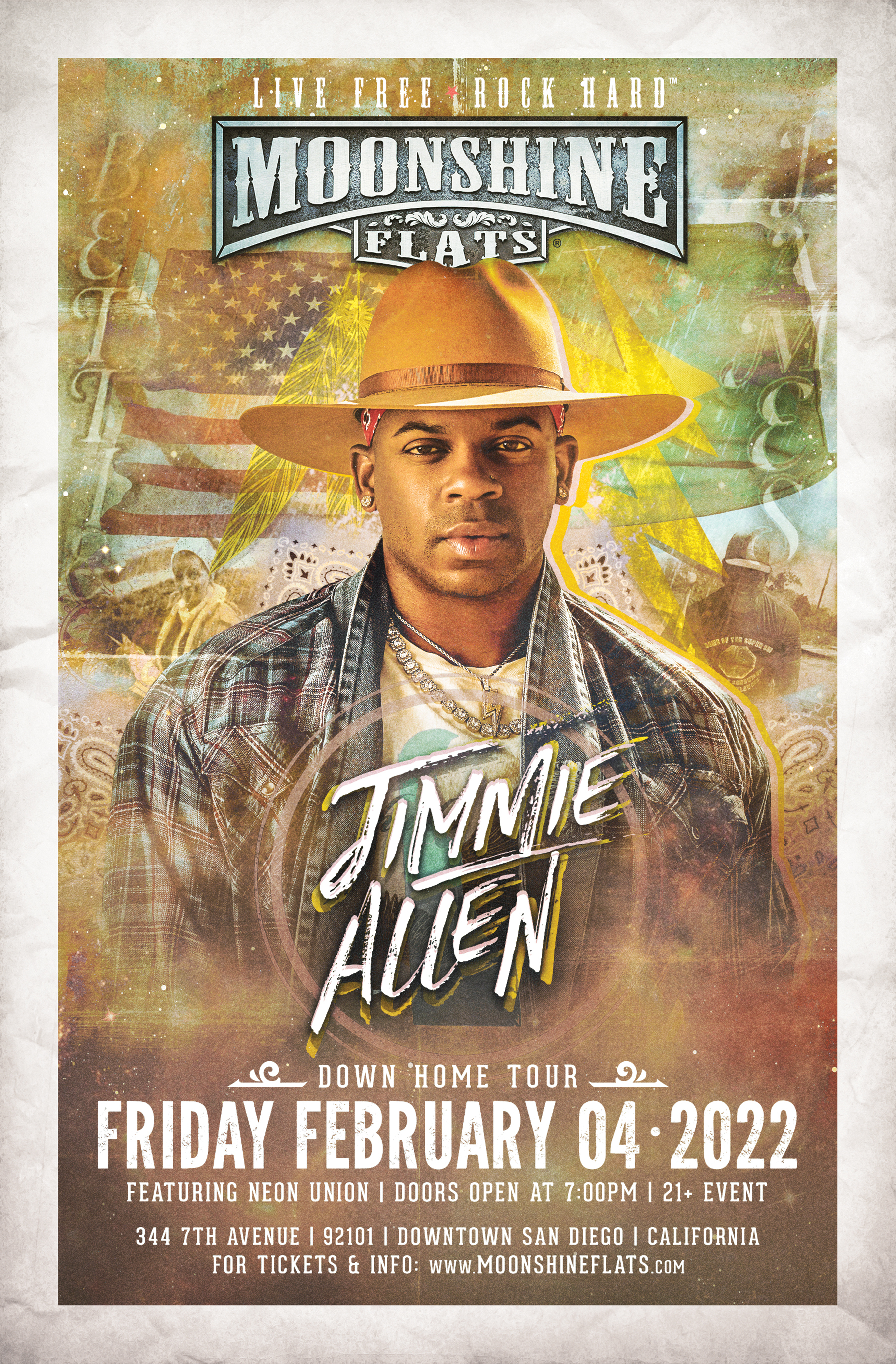 For multi-platinum selling, trailblazing Country star and current GRAMMY Award nominee Jimmie Allen, a simple phrase sums up his view on life and music: Never give up. Signed to BBR Music Group’s Stoney Creek Records, multi-platinum recording artist and songwriter Jimmie Allen has been blazing trails since the beginning of his breakout career. He made history as the first Black artist to launch a career with two consecutive No. 1 hits off his 2018 debut album Mercury Lane (which The New York Times dubbed as one of 2018’s strongest) – the first being his debut single “Best Shot,” which claimed the No. 1 spot on Country radio for three weeks, and second being “Make Me Want To.” In July 2020, Allen released his star-studded collaboration project Bettie James that has since garnered 171+ million streams and a slew of critical acclaim for the music, the historic nature of various collaborations, and its subsequent place in country music history. Named for his late grandmother, Bettie Snead, and late father, James Allen, Bettie James has been hailed as an “announcement of [Allen’s] arrival” and a “huge step for country” (NPR), and “a powerful statement from a developing voice” (Billboard). On June 25, 2021, Allen released the project’s follow up album Bettie James Gold Edition. Doubling down on Allen’s expansive love for music across genres, the album “broadens country’s borders” (Billboard) and includes nine brand new songs featuring Babyface, BRELAND, Keith Urban, LANCO, Lathan Warlick, Lindsay Ell, Little Big Town, LOCASH, Monica, Neon Union, Pitbull, teamwork. and Vikina in addition to the previous collaborations on Bettie James with Brad Paisley, Charley Pride, Darius Rucker, Mickey Guyton, Nelly, Noah Cyrus, The Oak Ridge Boys, Rita Wilson, Tauren Wells and Tim McGraw. Allen won the both the ACM New Male Artist of the Year award and CMA New Artist of the Year award in April and November 2021, respectively. Hailed by GRAMMY.com as one of “5 Black Artists Rewriting Country Music,” he has amassed more than 850 million on-demand streams and performed on The Kennedy Center Honors, Dick Clark’s Rockin’ New Year’s Eve, Jimmy Kimmel Live!, Good Morning America, TODAY, American Idol, Tamron Hall Show, The Steve Harvey Show, ACM Awards, CMA Awards, CMT Music Awards, and more. He is a member of the 2021 Artists Committee for the 44th Kennedy Center Honors. His current single “Freedom Was A Highway” with superstar Brad Paisley is climbing through the Top 20 on Country radio as he is out on the road on Paisley’s headline Tour 2021 as special guest this summer. Allen’s debut picture book, My Voice Is a Trumpet – a powerful story about speaking up for what you believe in, at any age – was published on July 13, 2021 with Flamingo Books, an imprint of Penguin Young Readers. Allen also serves as Executive Music Producer for Netflix’s series Titletown High, which premiered globally on August 27. His song “Big In A Small Town” is the theme song for the series, which follows a Georgia town where football rules and winning is paramount, a champion high school team tackles rivalries, romance and real life as they work toward the ultimate goal: a state title. He most recently competed as a contestant on Dancing With The Stars’ landmark 30th season on ABC.   Opening Acts

Leo Brooks - Leo Brooks' dad handed him an acoustic guitar and introduced him to the music of George Jones and Hank Williams at the age of four. Growing up in Miami, Leo spoke English and Spanish fluently and developed his songwriting chops at a young age while learning to play the bass guitar. His first audition was for the legendary Lauryn Hill right out of high school and eventually became her musical director. Leo then went on to become a Grammy Award- Winning collaborator for artists including: Pitbull, Lauryn Hill, Jennifer Lopez, Mary J. Blige, Cee Lo Green, and John Legend. Andrew Millsaps - Andrew Millsaps was born in Surry County, NC and started playing guitar and writing music at the age of thirteen. Andrew officially began his career playing for his friends and family around kitchen tables and weekend bonfires. Shortly after his high school graduation, he began performing at local venues while attending and then graduating from NC State University. Andrew was a semi-finalist in the "Music City Song Star Competition" and earned first place in the "Merlefest "Chris Austen Songwriting Contest."

As an artist, Vancouver-native Madeline Merlo personifies her coastal upbringing - and nothing states that case stronger than the laid back, seemingly effortless feel to her sound. With fresh, fun and, occasionally, quirky melodies, and an unmatched depth in both vocals and lyrical storytelling, her music bridges the perfect pop-country gap. “I want people to have fun when they listen to my music… But I also want to be able to say something at the same time.” Madeline has already seen an impressive career, releasing a series of successful singles to Canadian country radio -  including debut “Sinking Like A Stone,” “War Paint,” “Whatcha Wanna Do About It,” “Neon Love,” “Dear Me,” and her most recent country radio Top 15 hit, “Kiss Kiss.” On April 13, 2020, Merlo appeared on hit NBC show Songland, where her song “Champagne Night” was chosen by 7-time GRAMMY® Award-winning group Lady A. The trio released the “summertime anthem” (Country Now) digitally the next day, making it the singer-songwriter’s first cut. “Champagne Night” has since topped the US country radio charts, making it Lady A’s 11th number one. Social media platform TikTok helped Merlo’s current single “It Didn’t” reach Rolling Stone’s Breakthrough 25 chart last month. The song is available on all platforms now.